Summary of the Training Manual – Community Safety in Yemen

The Role of Youth in Peacebuilding in Yemen

The Community Safety Committee in Taiz is currently implementing its first initiative at Al-Judairi Police station. The initiative offered some renovation at the station which was partially damaged as a result of the war. The station’s entrance, as well as the complaints reception department, are being repaired and renovated to facilitate the access of citizens to the police station. In addition, women and juveniles detention rooms are also being repaired. These needs were identified in the field assessment carried out earlier by the community safety committee, in coordination with the police department and representatives of citizens in the neighborhoods served by the Al-Judairi police station.

It is worth noting that the implementation of this initiative comes with a generous support from the European Union and the Kingdom of the Netherlands under the community safety project, which is being implemented in its first phase in five Yemeni cities.

Summary of the Training Manual – Community Safety in Yemen 2021 Manuals

The Role of Youth in Peacebuilding in Yemen 2020 Brief 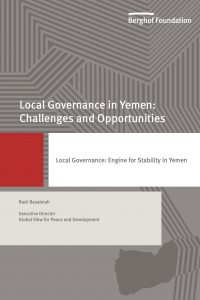 Would you like to support the strengthening of community safety in Yemen?

The Berghof Foundation and PDF Yemen invite you to learn more about the project and to share related resources.